In the 1960s, a man named Nick Sand was in large part responsible for crafting and distributing over three million hits of the iconic variety of LSD known as Orange Sunshine. Perhaps the most infamous of all underground chemists of the era, Sand was also a prolific producer of other mind-altering entheogens like MDMA and synthetic mescaline, and he was the first chemist to synthesize DMT, rather than extract its key components from organic sources.

Nick Sand was also the first person to realize that synthetic DMT could be vaporized and inhaled, and his own personal experience with the so-called “Spirit Molecule” led to a vision quest that put him on his lifelong path of entheogen research and propagation. 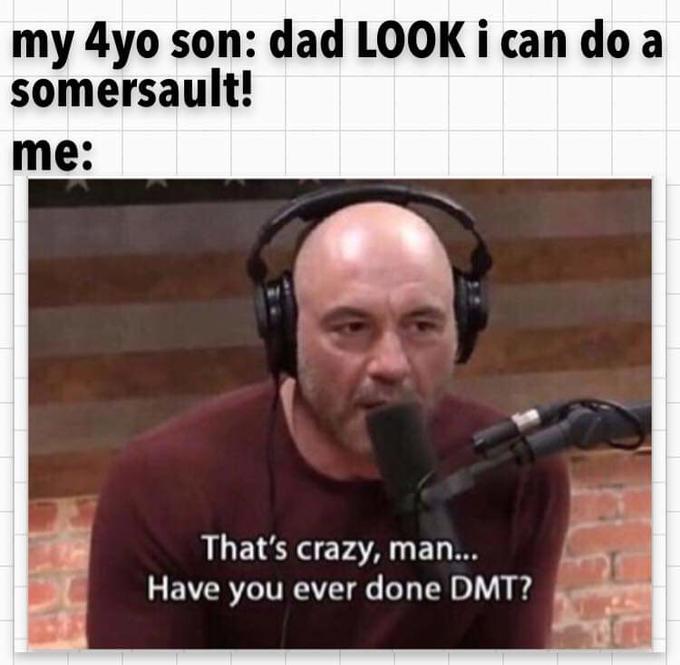 Today, DMT is being touted by mega-celebrities like Joe Rogan to the point where it has become a template for an ongoing meme. DMT is currently undergoing several lab-grade studies to determine its therapeutic potential in treating depression, anxiety, PTSD, eating disorders, and even traumatic brain injury.

Once a rare substance that you had to “know a guy who knows a guy” to get your hands on, these days “the businessman’s trip” can be found from coast to coast in incredibly convenient vape pen carts and this move toward the mainstream has more and more people curious about trying DMT.

One question remains: Is smoking or vaping DMT safe?

DMT: PREPARE FOR BLAST OFF

If you have looked into DMT at all, you have likely come across the fact that many plants and animals, and even our own bodies, produce DMT naturally. You have likely heard of your pineal gland and you might have even had some wook chick try to “de-calcify” it for you.

All of this, in conjunction with DMT’s reputation as a quick-hitting, rapid recovery hallucinogen, leads many people to think that something so naturally occurring cannot be bad for us. But is that prudent?

Chlorine and ammonia also naturally occur in the human body – we highly suggest you do not dab those, though.

Much like Ayahuasca, our body has a built-in defense mechanism against the extremely hallucinogenic effects of DMT in the form of an enzyme known as monoamine oxidase, or MAO.

With ayahuasca, for example, shamans in the South American rainforests not only identified a specific plant that was rich in DMT, but they also discovered and positively identified another plant that would naturally inhibit that MAO, which is why the experience with Ayahuasca is so intense and prolonged.

As we have written before, our bodies are optimized for expelling foreign or potentially toxic substances as efficiently as possible, and our MAO response is evident in the 15-20 minute DMT “trip” that most people experience.

By dabbing or vaping DMT, or by supplementing our DMT consumption with an MAO inhibitor, we can flood the bloodstream with the active compounds in the hallucinogen, triggering the “self-transforming machine elves”, as famed psychonaut Terence McKenna described his DMT visions.

DMT: DAUNTING FOR SURE, BUT DANGEROUS?

So, is it safe to commune with visions of deities, elves, temples, sacred geometry, or impossible landscapes?

One of the most beautiful aspects of psychedelics is the simultaneous feeling of mental fatigue and rejuvenation that they provide. For most folks, the last thing they want to do for weeks or even months after an effective hallucinogenic experience is to do it again. Just the thought of it is exhausting, if not a bit frightening.

Note that we said “most folks”…

Yes, there are cases of people enjoying their entheogens a bit too much, and with DMT that can certainly lead to some problems if left unchecked. Rare cases of serotonin syndrome have been reported whereby the victim can experience agitation, confusion, nausea, dizziness, rapid heartbeat, and rapid changes in blood pressure. In the most extreme cases, serotonin syndrome can cause loss of muscle control, twitching, tremors, high fever, vomiting, and blackouts – all of which can occur with just one mega-blast of DMT.

Those who smoke or vape DMT multiple times a day, for days or weeks on end, risk symptoms such as psychosis, delusions, mania, and paranoia, along with a general detachment from reality. It is all too easy to become enamored with the hidden entities and worlds that “Spunions” are convinced can only be accessed through their consistent consumption of DMT.

It should be noted that both anecdotally and scientifically speaking, these cases of mental detachment are extremely rare.

They are not the only dangers or considerations that should be made by anyone curious about consuming DMT, though.

Though the “trip” will differ from person to person based on set and setting and a hundred other variables, most folks experience a select set of consistent reactions when they dab or vape DMT.

After the second or third “hit”, the eyes usually roll back in the head, the body slumps, and whatever pipe, bong, or rig they were holding will be dropped (watch that banger!).

To observers, they appear to have passed out, aside from an occasional twitch or murmur.

The person who just inhaled the DMT generally “blasts off” into a blank space, experiencing a high-pitched ringing from a trillion angles, and an indescribable RUSH from all directions at once as the trippy visuals begin. Many users recall an extreme tightness in the chest, and any medical professional monitoring such things would note a spike in heart rate and blood pressure at the onset of the psychedelic effects.

For most people, this just adds to the “near-death” vibes that a proper DMT trip delivers. But for folks with respiratory or cardiac issues, this roller coaster ride of effects could trigger underlying health problems.

For these reasons, and many others, it is highly recommended that you do not do DMT alone. It should always be treated with the utmost reverence and respect, both for its impact on the mind as well as on the body.

If that is the approach taken with this incredibly powerful entheogen, and as long as you can wholeheartedly trust the source from which you got it,  it is safe to say that DMT is safe to consume.